The 1902 Gordon Bennett Cup Race, held in France, was won by Selwyn Edge driving a Napier. The following year, on 2nd July 1903, the Gordon Bennett Race was held in Ireland, run over a distance of 545.8 Kilometres over closed public roads. Though the race in 1902 had been won by Great Britain, and so should have been held in that country, the racing of motor vehicles on public roads was forbidden by law there. Following some creative thinking, the apparent stumbling block was solved by the passing of a special Act of Parliament in London. This allowed for racing on public roads in Ireland, and since Ireland was governed until 1922 by Great Britain, it meant the race could be held in Ireland.

As a compliment to Ireland the British team chose to race in Shamrock green which later became known as British Racing Green. There were strict guidelines: each car had to have two seats, side by side, with a driver and a riding mechanic. There was also a requirement that all parts of each competing car had to be manufactured in the country represented by the particular car.

Safety at motoring events was a major concern at this time. This followed the many accidents and the loss of eight lives at the Paris to Madrid race held in May of the same year. With a view to avoiding similar fatalities, the 1903 race in Ireland was held over a closed course which was carefully prepared for the event and was marshalled by police officers assisted by troops and club stewards. Strict instructions to keep spectators off the roads and away from corners were issued and followed.

The route consisted of two loops in the shape of a figure of eight. Tented villages were established round the course for the benefit of spectators. Hotels were full and some 700 people spent the night before the race in tents at a “canvas village” near the course. Enterprising locals also erected viewing stands at suitable locations around the course. A number of the viewing stands took the shape of bridges across the road with seated accommodation, including a special viewing box for the Lord Lieutenant, the chief representative of the King of England in Ireland, along with his party.

The Morning of the Race
Crowds started to gather on the course at 5 a.m. on July 25th 1903. The cars were started at intervals for safety reasons and to avoid overtaking. The race was very eventful with plenty of excitement to retain the interest of the spectators. Mooers (USA) retired after the first lap; Stocks (England) left the road early on in the race; Foxhall Keene (Germany) recorded the fastest lap on the first round of the course. However he later tore off a tire on a bend… Jarrott (England) crashed approaching the village of Stradbally at 70mph (113kph). Fortunately, both he and his mechanic (Bianchi) escaped without serious injury. Edge (England), who was the favourite, suffered from an overheating engine and tyre problems with the result that Camille Jenatzy (Germany) gained time on him. Gabriel (America) was recorded at 80mph (129kph) on parts of the course. Wilson (America) was forced to retire and is reported to have had oil instead of petrol in the tank.

The rain started in the 6th lap and resulted in slippery road conditions, adding more excitement to the event for the gathered spectators. De Caters (Germany) retired with a broken axle leaving Jenatzy driving the only Mercedes left in the race. At that stage the three French cars were still in the race. Jenatzy was in the lead and two of the French cars were gaining on him in the last lap. However De Caters retired ten minutes from the finish line and so victory for Jenatzy was assured.

The Victor: Camille Jenatzy
Jenatzy was born in Belgium in 1868 to a Hungarian immigrant family and practiced as a civil engineer before becoming involved in cycle racing. Known as the “Le Diable Rouge” (the red devil), because of his flame-hair and beard, he was a remarkable engineer with superior mechanical knowledge. His Mercedes was the only car not to break its rear axle. Many considered that his style would count against him on the tight, dusty Irish course as his technique included what has come to be known as a ‘four-wheel drift’.

With the odds stacked against them, the win for Jenatzy and Germany was great news for Mercedes as some weeks prior to the race fire had destroyed the Daimler factory at Cannstatt and three of the 90hp Mercedes destined for the 1903 Gordon Bennett Race were destroyed. However, two of the German team already owned their own 60hp Mercedes cars and were happy to drive them in the race. This still left a requirement to borrow customers’ cars for the race. To the surprise of many Jenatzy won the race in a car borrowed from a Mercedes customer based in Paris.

While Germany won the race, the French won the team’s cup. France was the only team to get all its cars to the finish of this epic race, which covered more than 500km. Jenatzy, in his borrowed car, made history for Mercedes as it was their first ever motor racing victory, kicking off a legacy that continues to this day.

James Gordon Bennett: The Eccentric Millionaire
The eccentric James Gordon Bennett. was born in 1841 to an Irish mother and a Scottish father. His father owned the New York Herald Tribune newspaper. James, with his parents’ consent moved to Paris to head up the company’s European newspaper office. While there he promoted the Tribune by sponsoring a range of sporting events and exhibitions. In 1900 he sponsored the first ever international motoring competition for “The Gordon Bennett Cup”. It was intended to be a competition between national automobile clubs, or nations, and not individuals. The event was conceived as the equivalent of the yachting America’s Cup, which by pitting nations against each other in competition would stimulate and test new automobile technology. Interestingly, it is understood that he did not drive a car and never attended any of the Gordon Bennett Races. He died aged 77, virtually bankrupt, having spent an estimated $40 million during his lifetime.

The Gordon Bennett Trophy
The Trophy for the race was a created by the famous Parisian silversmith Louis Aucoc and depicts a Panard car steered by the Genius of Progress with the Goddess of Victory standing on a seat. The trophy is held to this day in Paris by Automobile Club de France (ACF). There was a full-size bronze replica of the original trophy held by the Irish Veteran and Vintage Car Club, which however was tragically destroyed in a fire in Ireland in 2015.

Annual Commemoration of the 1903 Race
Every year since 1975 The International Gordon Bennett Rally is organised by Irish Veteran & Vintage Car Club, when more than 100 pre-1930 historic cars take part in the commemorative event. The participating vehicles are all classified as Vintage (pre-December 1930) in accordance with FIVA (Fédération Internationale des Véhicules Anciens) international classifications. The three-day event is held on roads in the same Irish counties over which the original event was run.

In addition to the important motoring and touring stages of the event there is also an important social aspect involved, including a prize-giving ball and social held on the Saturday evening. On the Sunday morning of the third day of the event a visit is paid to a different local tourist attraction, including historic buildings or gardens.

The main attraction of the event is reliving history with the mobile heritage that was used in the early years of the 20th Century and which now is a solid reminder of technical advancements and the benefits of wellbeing and community.

This three-day rally is considered a highly prestigious event and has attracted, over the years, a considerable number of overseas entrants from Northern Ireland, the UK, Europe, the USA, Australia and South Africa. The number of cars taking part has ranged from 120 to 165.

The event is always reported in the national and international press, reinforcing a positive impression of Ireland. The event generates considerable interest in the various towns and villages through which it passes. The local community along the route come out to view the spectacle of the cars and wave to the passing participants, some of whom dress in period costume, all in line with the spirit of the original event.

The regularity timing aspects encourages a spirit of competition amongst the enthusiastic entrants, as they seek to pass the timing points precisely on schedule. Additionally, one of the most encouraging aspects is that we are now seeing a younger generation taking part in the event, particularly in the competitive sections.

A deeply felt respect for history is important to the organisers who continue the tradition of planning the route along much of the original 1903 Gordon Bennett Cup Rally in Ireland and hosting lunch, though in varying locations, in historic sites that were associated with the original event.

The Irish Veteran and Vintage  Car Club was delight to welcome the FIVA Culture Commission to attend the 2019 event and to hold their meeting at the rally headquarters in the Mount Wolseley Hotel.

Regrettably the club’s plan to celebrate the 45th anniversary of the event in June 2020 had to be cancelled  due to the COVID-19 pandemic.

The IVVCC is very proud of the club’s record in providing this important commemorative remembrance of the 1903 rally and look forward to continuing this event in 2021 and in the following years.

Text by Peadar Ward, Member of the FIVA Culture Commission 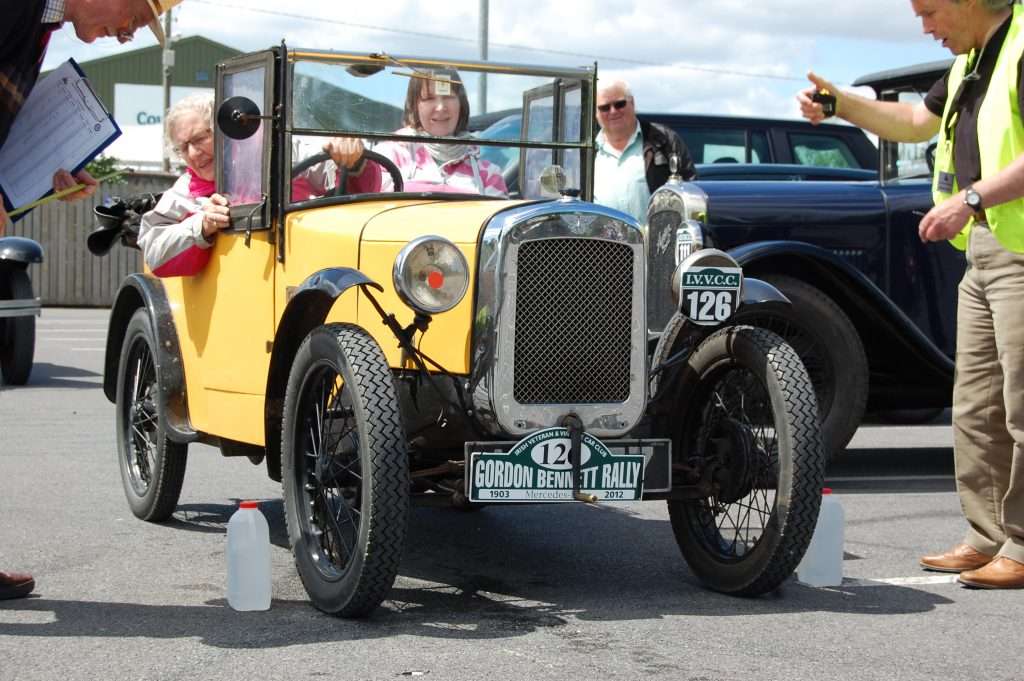 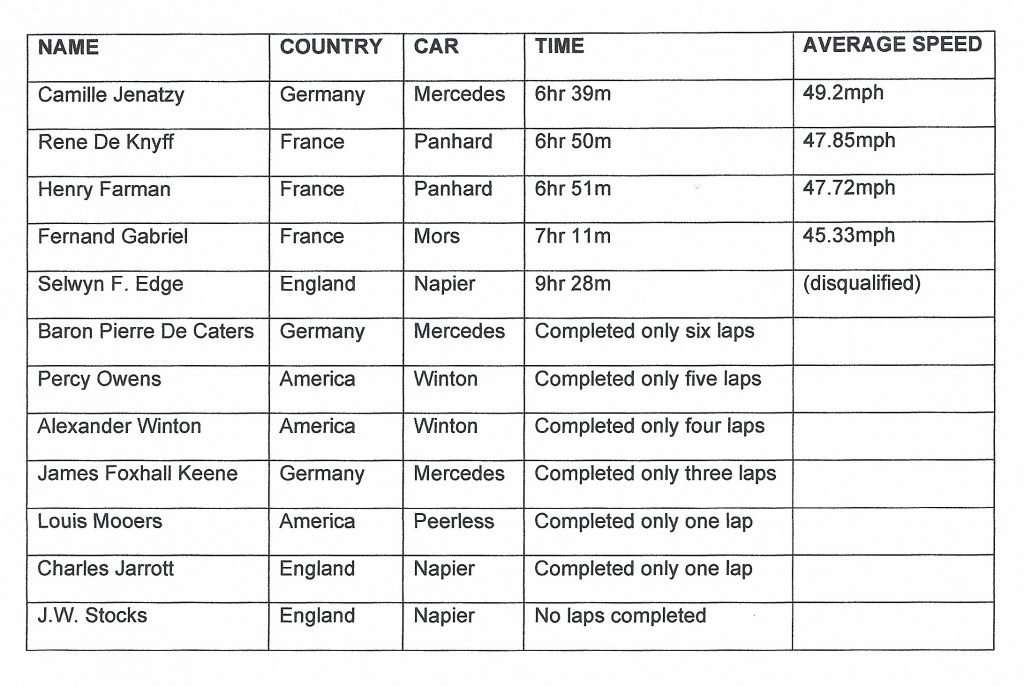 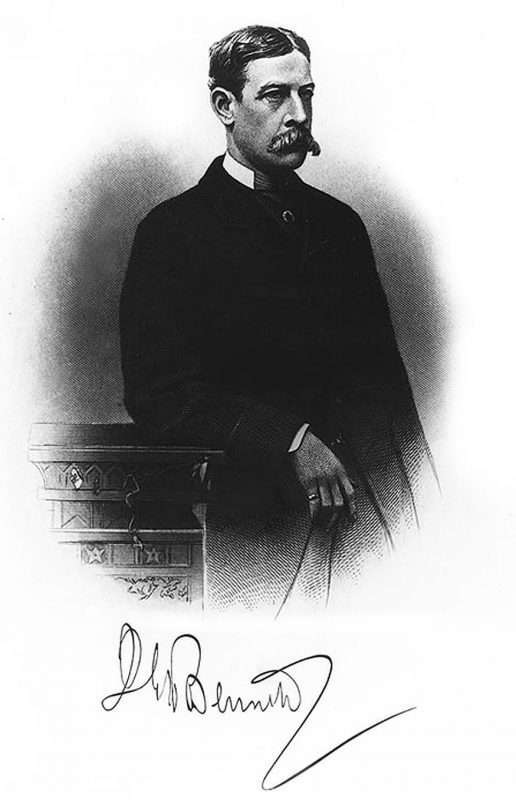 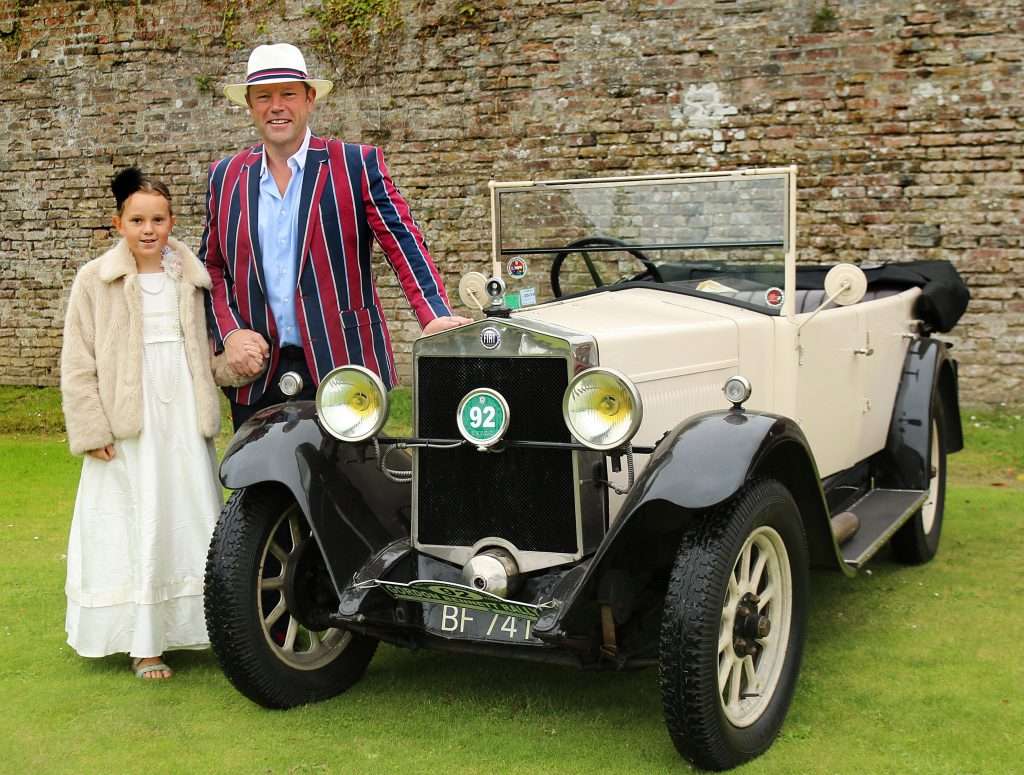 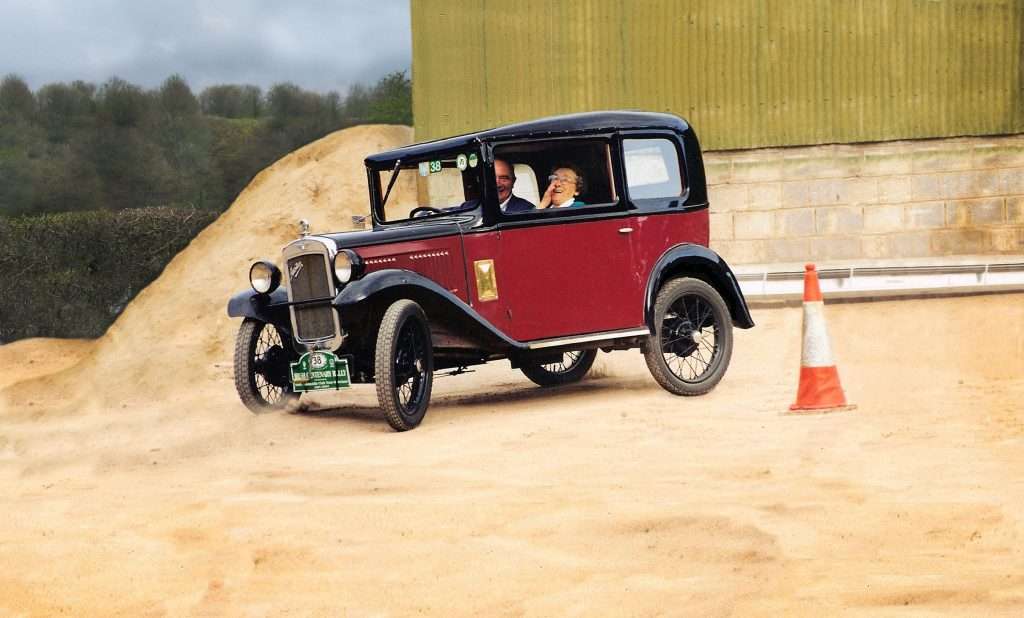 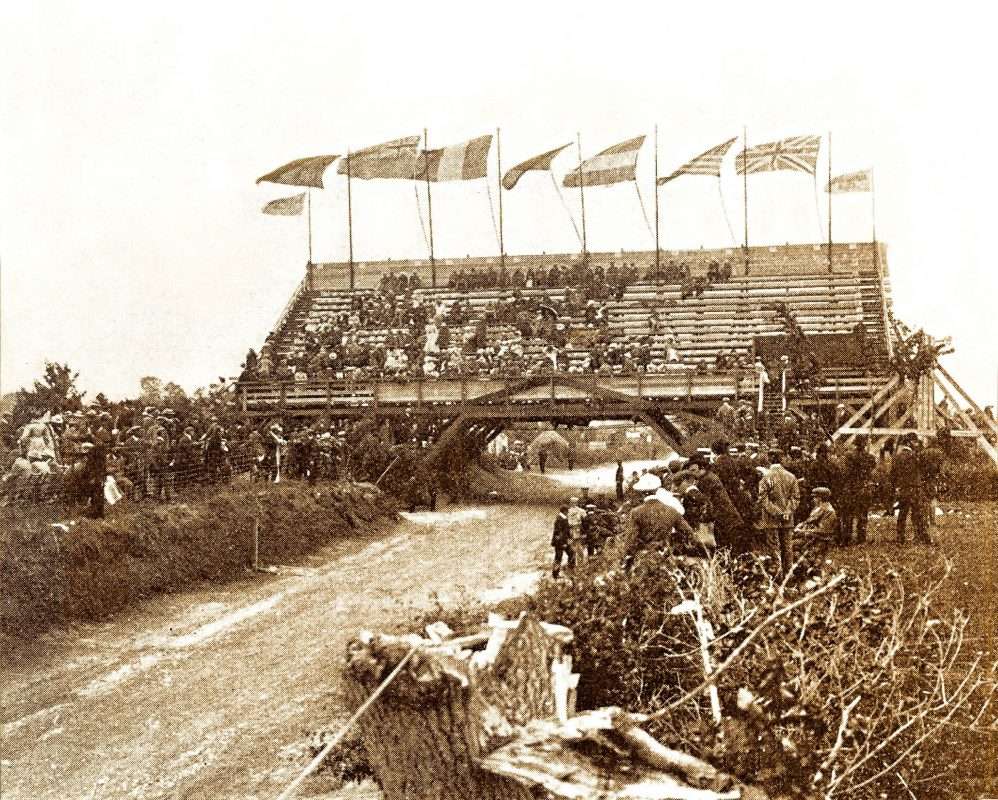 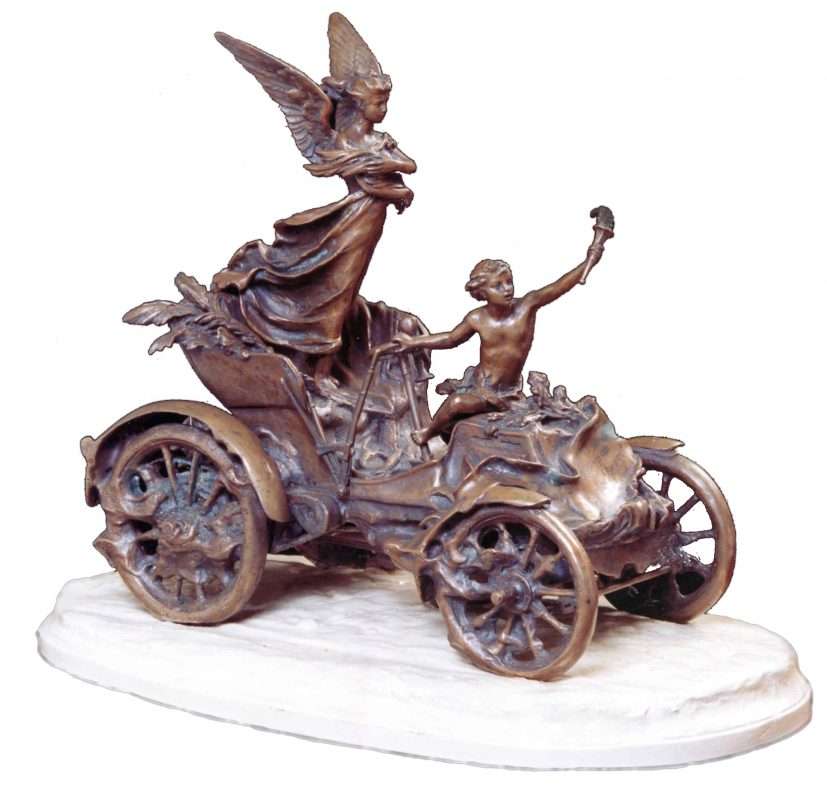 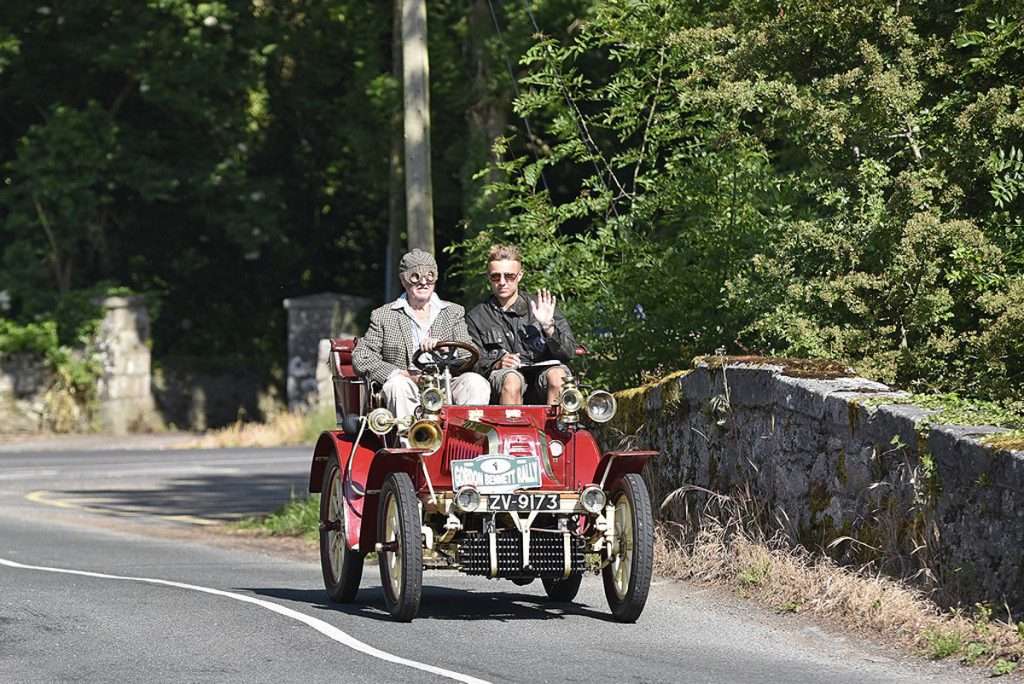